Quick Facts about Cardi B

Who is Cardi B?

Cardi B is an award-winning American rapper, television reality star, and social media personality who rose to fame after releasing her debut single, “Bodak Yellow,” which topped different music charts. As a social media personality, Cardi brought the whole world to attention after she opens up about being a stripper through her social media accounts. Cardi B is a renowned actress who made an appearance on VH1’s reality show “Love & Hip Hop: New York “ in 2015. Cardi however left her show in a bid to chase after her music career from which she has assuredly reaped big since the singer has been able to bag several awards. For instance, in 2019, Cardi B’s debut album “Invasion of Privacy” saw her win a Grammy-Award.

How Was Her Early Life?

Cardi B was born Belcalis Marlenis Almanzar on the 11th of October, 1992 in The Bronx, New York. The “Bodak Yellow” singer is of mixed Caribean descent with her father being of the Dominican heritage and mother being a Trinidadian. Young Cardi spent most of her time with her grandmother in the neighboring Washing Heights and when she became of age she was enrolled in Renaissance High School For Musical Theater & Technology. In her teenage years, Cardi belonged to the Bloods gang and as she proudly told, she, later on, had to become a stripper in a bid to escape abusive relationships and poverty as well. “It really saved me from a lot of things. When I started stripping I went back to school,” Cardi B narrated.

According to her confession, stripping gave earned her a lot that she managed to resume her studies though for a short time since she eventually dropped of college to fully focus on her career. Upon dropping out of school, Cardi B settled on social media, especially Instagram and Vine as the basis for growing her name to the top of the world. After gaining some popularity on social media, Cardi B grew into a television star after making her appearance on the reality show, “Love & Hip Hop: New York” and ultimately being a big name in the rap music industry. Cardi describes her early life as a fight-to-live one since admits and apologizes for dragging and robing men back in the days she was a stripper.

The name Cardi B is was derived from an alcoholic beverage named “Bacardi” and as she narrates she had to shorten it to Card. “My sister’s name, her name is Hennessy, so everybody used to be like Bacardi to me… then I shortened it to Cardi, and the ‘B’ stands for whatever… depending on the day,” says the singer.

How has Been Her Career Journey?

From being a stripper, Cardi B started becoming common in the public eye following the going viral of her videos on Vine and Instagram pages. This alone gained her much recognition that she eventually landed herself an acting role on the VH1 reality show series, “Love & Hip Hop: New York” in 2010. Cardi B, who joined the show in its season six, immediately shot up to be the fan’s favorite. However, her career at VH1 was short-lived since she quit the show after two seasons in a bid to bid chase her rap career. 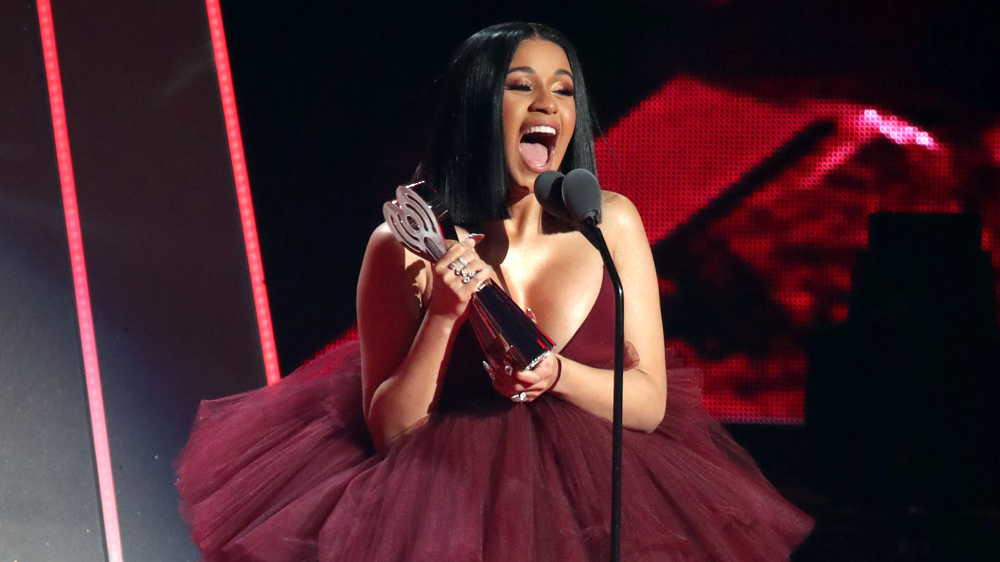 Cardi B ventured into music through the remix version of the song, “Boom Boom” which was performed by Jamaican rapper Shaggy. This alone gave her an ignition which saw her release her first music video which was a cover of the song “Cheap Ass Weave” by Lady Leshurr in the December of 2015. Her first mixtape entitled “Gangsta Bitch muMusicVol1” came through in March 2016 before releasing its follow-up, “Gangsta Bitch muMusicVol 2” in 2017. Shortly after, Cardi B signed a recording contract with Atlantic Records under which she released her debut single “Bodak Yellow” in June 2017. The single was a hit that made it to number 1 on the Billboard Hot 100 chart. Before the end of the same year, Cardi made a major comeback with her second single, “Bartier Cardi”.

As for the film industry, Cardi B debuted with the film “Hustlers” in 2019. The film was directed by Lorene Scafaria and it saw Cardi C0-star with Jennifer Lopez and Constance Wu.

Initially, Cardi B opted to be a stripper in a bid to escape abusive relationships. In 2017 however, Cardi B met rapper Offset with whom she fell into a romantic relationship. Just eight months into dating, the duo became engaged in and before anyone could figure it out Cardi B revealed that she was pregnant for Offset during a performance on Saturday Night Live. By the end of 2017, the lovebirds walked the aisle in a private ceremony attended by family and close friends. The couple was blessed with a named Kulture Kiari Cephus in July 2018 before breaking up in December the same year. It is reported that the duo maintains a close bond due to the child they share.

Basically, how are what are Her Body Stats?

The American rapper stands tall at a decent height of 5.4 Feet or 1.63 meters. Cardi has an impressive weight of 55Kilograms which once expressed in pounds totals about 121lbs. Her body measurements are 34-25-38 inch whereas her bra cup size is 32DD. Cardi possesses a dark brown eye color and blonde hair.

How Worth is Cardi B?

What are Some of her Achievements?

What are the Laser Known Facts About Cardi B?

What Controversy Revolve around Cardi B?

During an after-party hosted by Harper’s Bazaar in 2018, Cardi B caused major controversy after she attempted to physically fight Nicki Minaj by throwing one of her shoes at Nicki.